Over Svay Rieng province in eastern Cambodia, just before the border with Vietnam.

While on my usual pilgrimage to Boeung Kak district in Phnom Penh, I ran into these awesome kids who were very keen to have their photos taken. 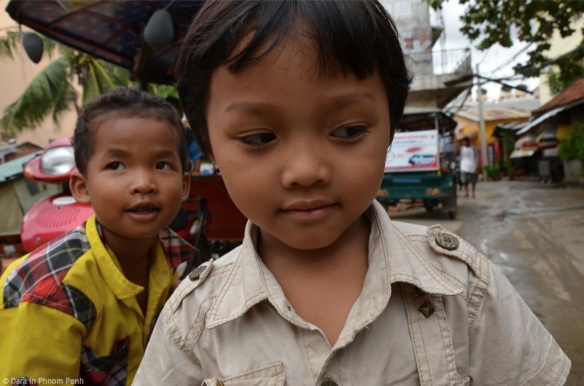 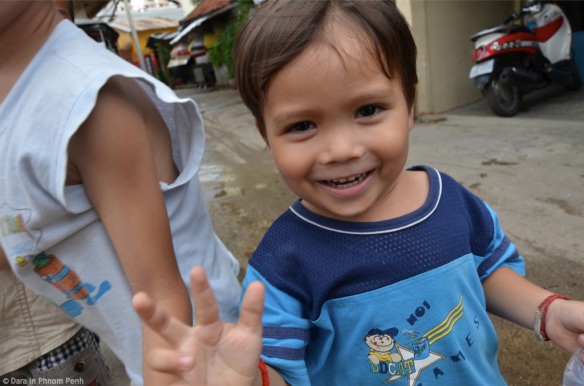 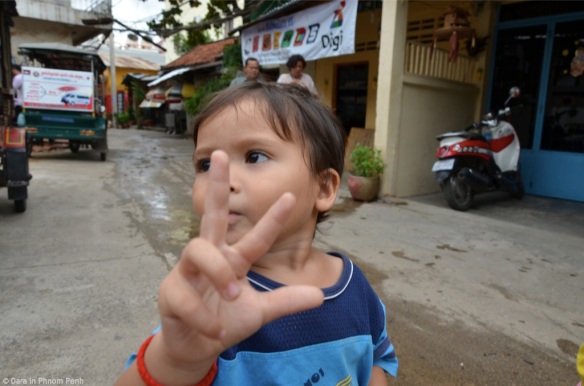 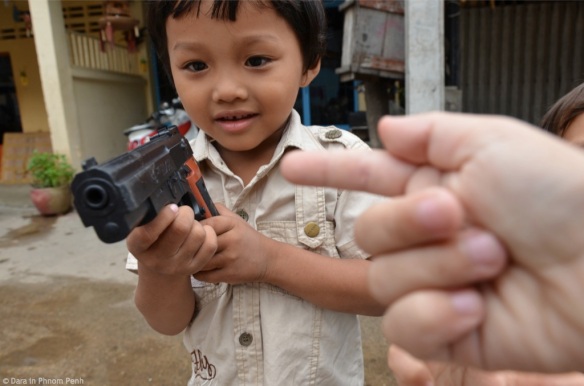 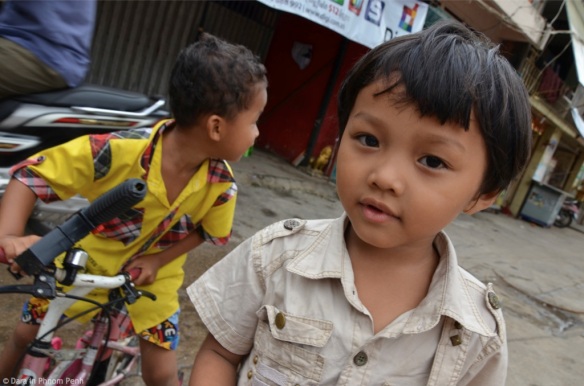 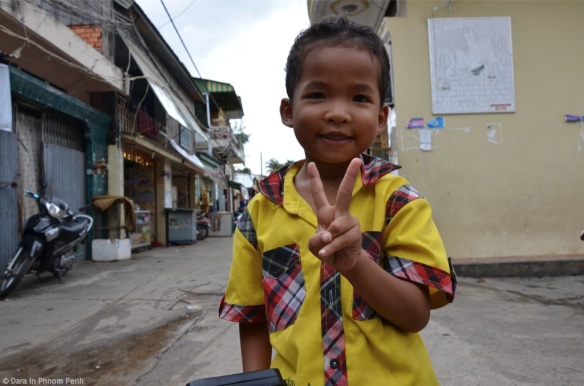 The ‘ringleader’ was an older boy named Dara, who essentially took the above shots of his friends (which is to say that I held the camera and he looked through the viewfinder, aimed the camera as he wanted, he counted to three in Khmer, “mouy, pii, bey!”, and I hit the shutter release). Hence, the credits for these shots are his.

Dara’s English was excellent too, especially for a boy under ten years old. Even though I worked the camera for him, he composed the shots and knew when he wanted the capture. I was impressed with what came out.

PHNOM PENH, CAMBODIA – It’s been just over a week since Cambodians cast their vote in the national election, and a definitive result remains elusive.

Both the ruling Cambodian People’s Party (CPP) and the opposition Cambodian National Rescue Party (CNRP) have claimed victory, and both parties have said that they welcome an investigation into allegations of irregularities at polling stations such as people not able to find their names on the electoral roll, or being told that they had already voted.

While the CPP says it is happy for an investigation to take place, it is refusing to go along with the CNRP’s insistence that the United Nations be a part of the investigative process.

Deputy Prime Minister Sar Kheng has said that involving the UN would be a violation of Cambodian law.

Meanwhile, the CNRP held a rally in Freedom Park in Phnom Penh on Tuesday to thank its supporters and let them know the party will continue to fight for change in Cambodia. Despite rumours of a police crackdown, several thousand people gathered to hear CNRP president Sam Rainsy and party deputy leader Kem Sokha speak. Police presence was very small, and the rally remained incident-free. 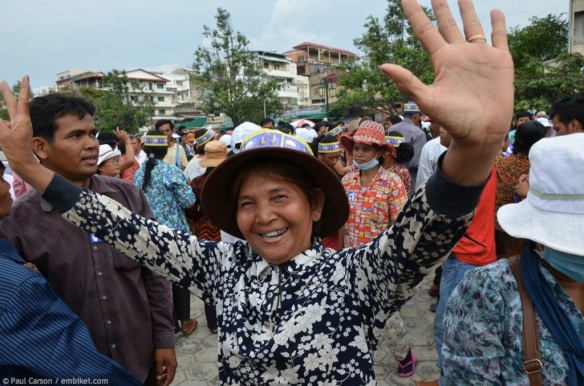 One of thousands of CNRP supporters in Freedom Park.

Part of the thousands-strong crowd gathered in Freedom Park.

CNRP MP Mu Sochua greeting the crowd towards the end of the rally.

A CNRP supporter in high spirits during the rally.

In January 2013 a memorial stele honouring journalists and war correspondents who were killed during the Cambodian civil war was unveiled in the park in front of Hotel le Royal in Phnom Penh. The hotel was home to most of the foreign journalists covering the war which lasted from 1970 until 1975.

Thirty seven journalists from twelve different countries perished during the five years of civil war which preceded the rule of the Khmer Rouge in Cambodia. 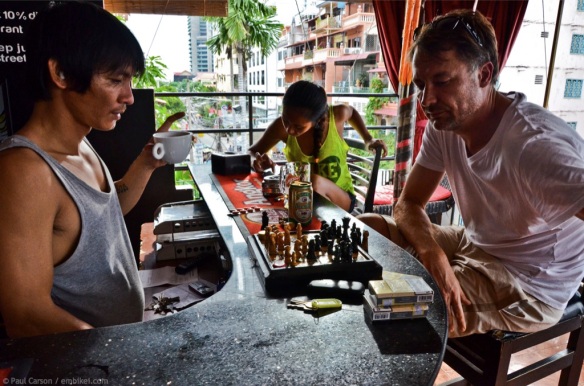 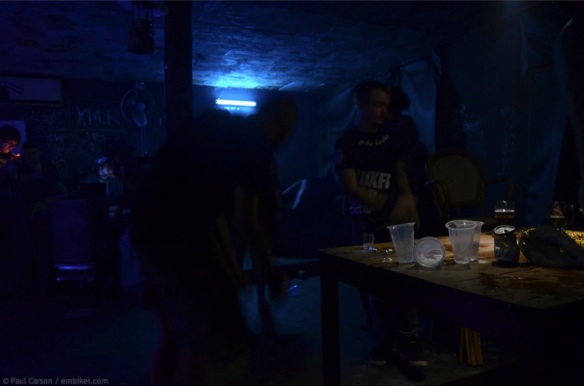 The below photos first appeared on New Matilda in the article ‘Cambodia Hits The Polls’. The article was also written by me.

Voters waiting to check their names on the electoral register in Phnom Penh. 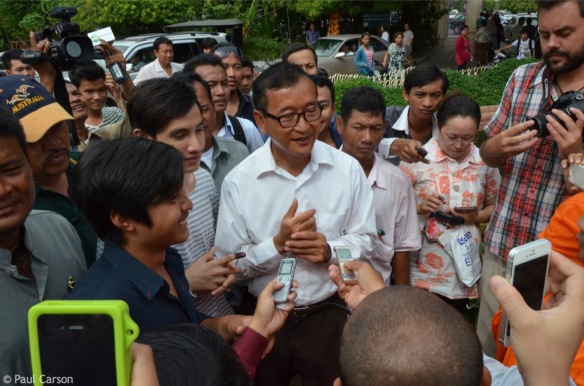 An election official helping a voter to find her name on the register at the polling station in Wat Botum temple. 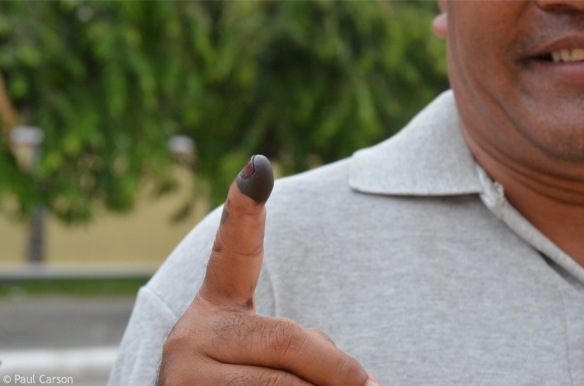 A moto-taxi driver outside the Royal Palace in Phnom Penh showing his ink-stained finger, showing that he has cast his vote.

Opposition leaders Sam Rainsy and Kem Sohka of the Cambodian National Rescue Party arrived in Phnom Penh on Friday and held a rally in Freedom Park. 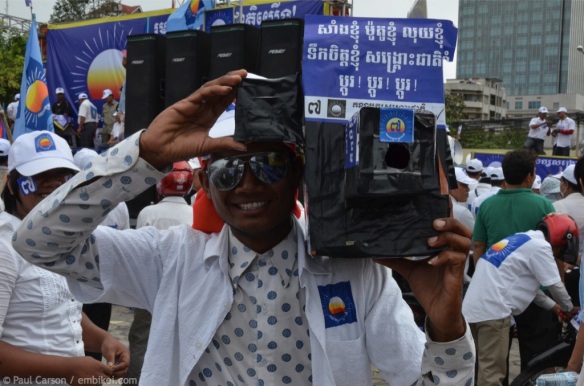 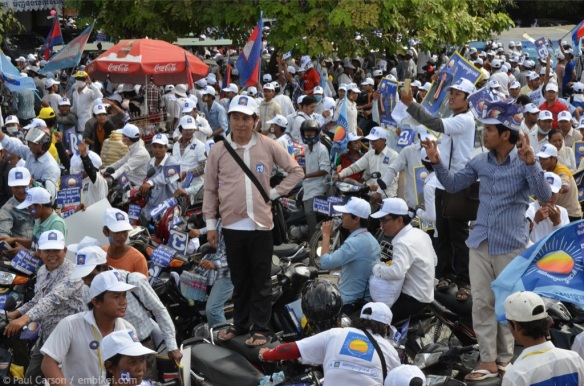 Meanwhile, supporters of the ruling Cambodian People’s Party were near Independence Monument, conducting a rally/street party of their own. 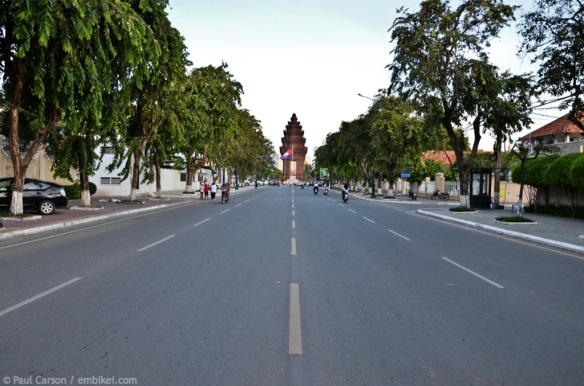 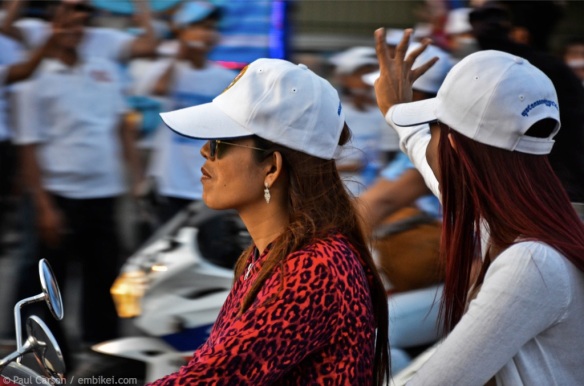 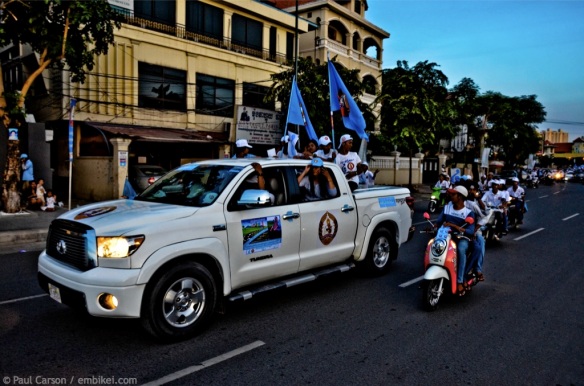 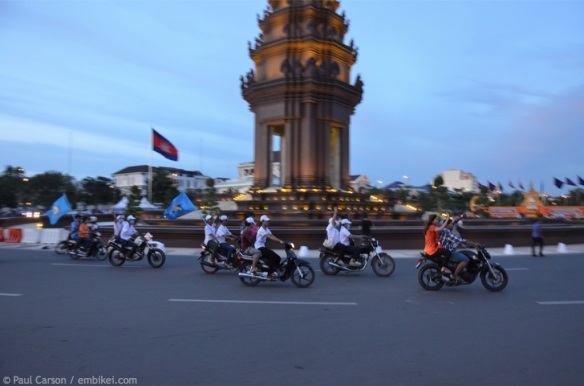 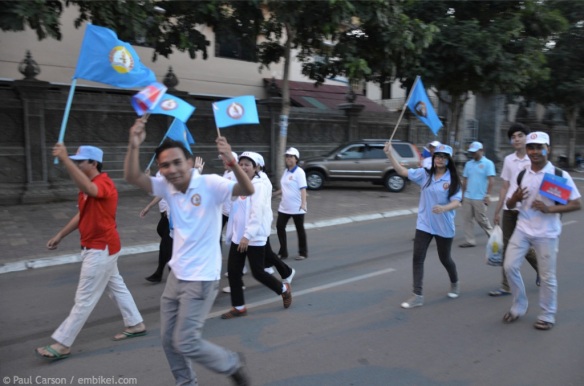 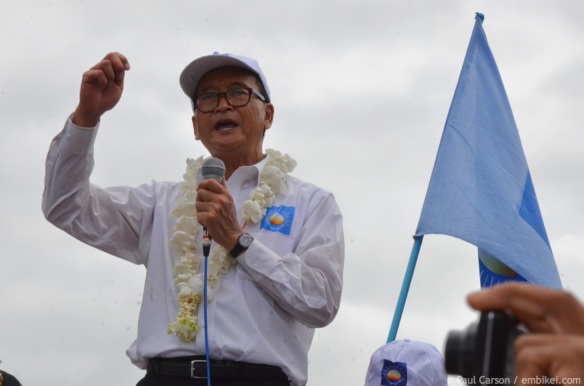 A section of the huge crowd gathered near Psar Nath to hear Sam Rainsy speak. 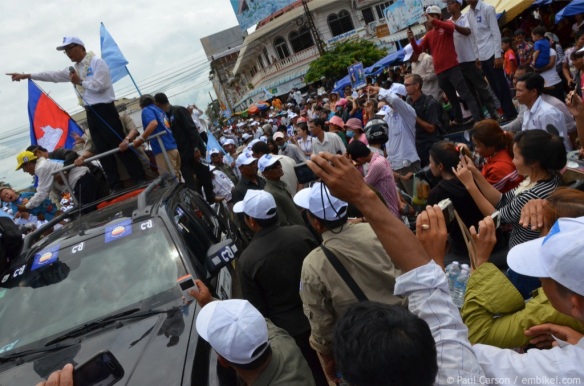 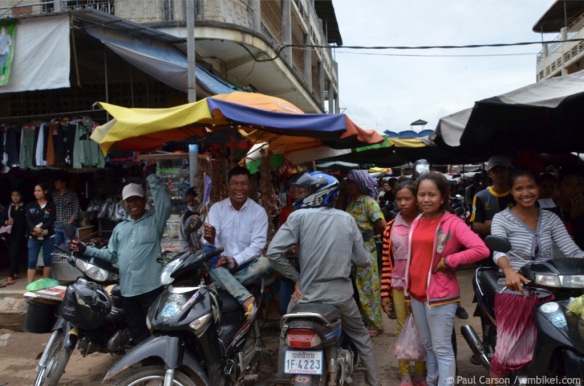 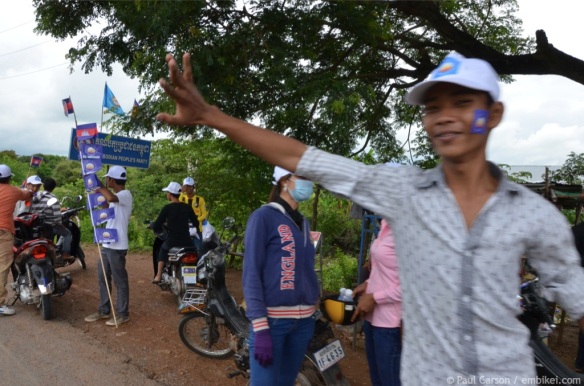 Young CNRP supporters on the roadside in provincial Battambang. 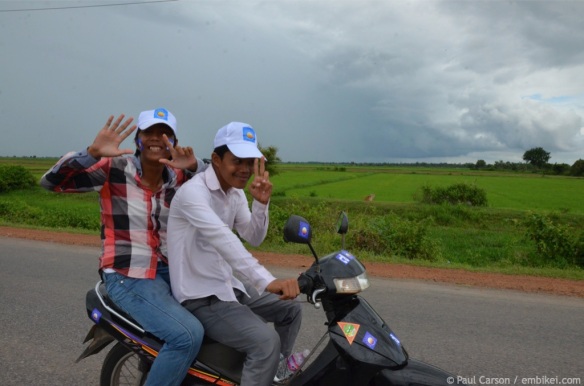 Mr Rainsy along with high-level party members Mr Kem Sokha and Ms Mu Sochua, have embarked on a rapid journey through many of Cambodia’s provincial centres before the election this Sunday.

On July 23, the convoy stopped in Battambang and drew a large crowd.

After Mr Rainsy spoke to the supporters massed outside Psar Nath, the convoy travelled through the countryside to spread its message of change for Cambodia.

Mr Rainsy left Cambodia in 2009 after being found guilty of charges brought against him by the Prime Minister, Mr Hun Sen. The charges, connected with the moving of border markers between Cambodia and Vietnam, are believed by many to be politically motivated.

Earlier this month, Mr Hun Sen petitioned for a royal pardon to be issued for Mr Rainsy so he could return to Cambodia and campaign for his party.

Because he was found guilty of criminal charges, Mr Rainsy was made ineligible to contest a seat in the election. Despite petitions to have Mr Rainsy’s name reinstated, he will not be permitted to run for his own party.

The ruling party, the Cambodian People’s Party, headed by Mr Hun Sen, is expected to win the polls on Sunday. The party has been in government since 1985. 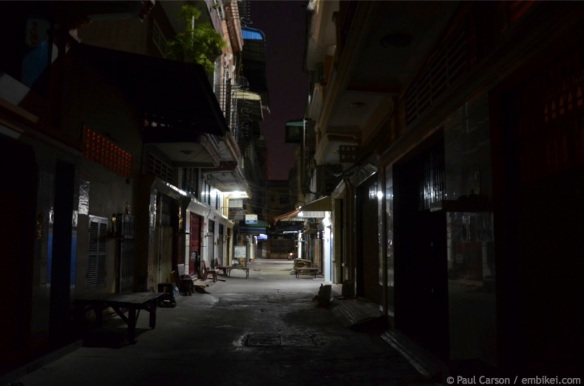